Also known as Shade or Townsend, Northfield Windmill is a small, three storey hexagonal smock mill, with two sets of horizontal grinding stones. It is believed to have been at this site since the 1830s and being on one of the highest points in the Soham area, it catches the prevailing Westerly winds.

Prior to being moved to this site, it is thought to have been one of the many drainage mills that were being used to drain the surrounding land of water. Engines began replacing mills in the 1830s making them redundant and one of these mills was moved here and converted to grind corn, possibly replacing an ageing post mill. It is thought that the Hunt Brothers of Soham did the millwrighting and that William Bullman was milling in 1834. 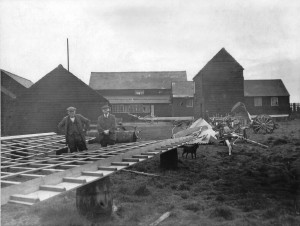 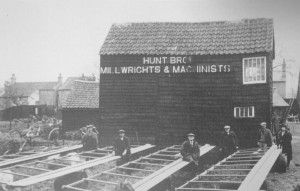 The mill last fully worked in the 1920s,  but went out of use and then lost two sails in 1928. Following this loss, the cap was strengthened, most likely by the Hunt Brothers and the mill set to work once again with two sails. 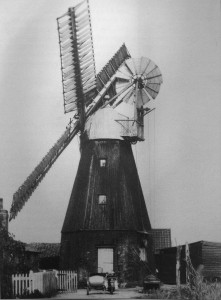 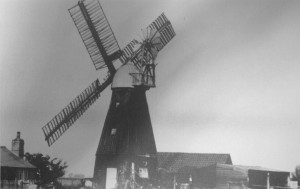 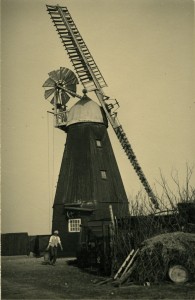 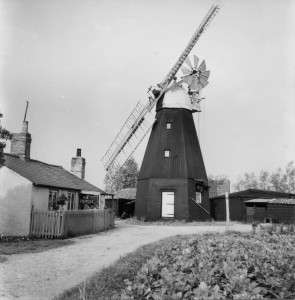 Commercial work ended in around 1941 or 1942 when the Howe Family last worked the mill. Some believe that bone meal may have been ground towards the end of its working life, but on lifting both sets of stones for cleaning recently, it was clear that this was not the case as only cereals were found.

By 1946 the sail shutters and fan blades had been removed and by 1964 the mill stood derelict. In September of that year, one of the two remaining sails was blown off and in 1968 the remaining sail was removed, leaving the mill reduced to broken stocks. 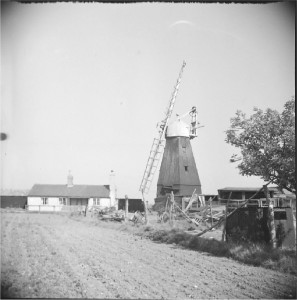 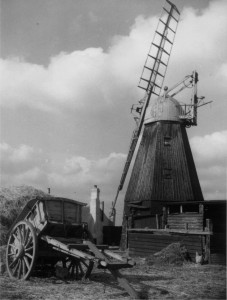 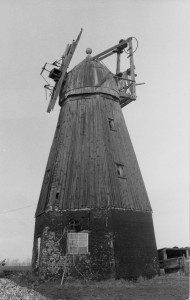 During the 1980s a holding operation to strengthen the smock tower was undertaken by the owner, whereby the vertical cladding was removed and the frame’s main beams were plated for additional strength. The whole tower was then clad in plywood sheets with a coat of bituminous felt to weatherproof it.

In the mid-90s the then owner received an English Heritage grant to restore the mill, with East Cambridgeshire District Council acting as the owner’s agent and Thompsons of Alford the millwrights.

In this ‘restoration’ the tower was left much as it was, but received an outer cladding of horizontal weatherboards, somewhat different in appearance to the vertical cladding that had been in place at the time, however it is clear in the derelict image above that horizontal boarding was under the vertical where there is a missing board. The cap was lowered to the ground and a new frame built off-site. Most ironwork was reused and new sails and fantail fitted. The sails had only one third of their shutters fitted whilst the machinery inside was left untouched.

Very soon after completion of the ‘restoration’ it was clear that there were two problems with the cap. Firstly, a lack of concentricity caused it to seize and break one of its centring wheels and also the pinion on the fantail. This eventually led to the fantail being tied up as it was no longer mechanically connected to the cap gearing. Secondly, the combined weight of the stocks, sails and windshaft were causing distortion of the cap structure bearing forwards and downwards and opening up gaps in the roof as well preventing the cap from turning.

In the ensuing years the mill was largely neglected, rain and birds made their way inside via the distorted cap causing further damage. The fantail was removed by volunteers in 2010 for safety as the blades might easily have been blown off. The gaps in the roof were covered with builders’ roof flashing tape as a stop-gap measure and rainwater ducted outside or into buckets.

Since taking on the mill in mid-2012 both rain and bird ingress have been reduced significantly and the interior thoroughly cleaned and dusted. It is hoped that removal of the sails and stocks will ease further distortion of the cap. In due course this will allow removal and repair of the cap and curb enabling the mill to turn to wind.

In the future, it is planned to repair the cap and renew the sails with a full set of shutters and for the mill to be mechanically sound prior to considering interior refurbishment.