After a fine weekend of weather, perfect for the lowering operation, both stocks were lowered safely the ground in readiness for assessment and refurbishment. Thanks must go to Steve Temple of Impington Windmill, Andrew Kite of Downfield Windmill and family friend Richard for helping to achieve this.

Saturday started off with the front stock being prepared. In a slight change of plan, it was estimated that the entire stock could be removed by pulling it out forwards (rather than having to rotate the windshaft round once the stock reached the ground) even though the tip wouldn’t have cleared the canister by the time it reached the ground. This is due to the fact that the rear of the stock tapers as it reaches the tips providing sufficient clearance for it to exit the stock. In turn it was decided that the clamps could remain attached to the stock and the upper two studs removed to allow them to slide clear of the canister. Although making the load heavier, the reduced number of operations would make the process simpler. As a result the rigging could be slightly less complex but would still prove to be a challenge.

Firstly a stout bar, long enough to pass right through the canister, was passed through the striking rod hole before the wedges holding the stock in tightly were knocked out. This acted as a safety measure until the rigging could be completed and weight of the stock taken by a winch. The clamps were still bolted up tightly, holding on to the canister at this stage nonetheless. Next the ‘Tirfor’ winch was attached to a nearby tree and the cable looped up and over a dedicated pulley which was attached to the front of the canister. The cable was then run down to a sling looped under the clamps and behind the stock. This part of the rigging would provide the lowering element by allowing the stock to descend under gravity with the winch providing the control. As a safety measure, a 6:1 block and tackle rig was also attached in a similar manner which would allow one person to provide a back-up with a friction loop wrapped through the door of the mill and around a large beam. Once the tension was taken up in the cable and the back-up, the upper two studs holding the clamps together were removed to allow them to spread. Lastly the safety bar could be removed and the stock was ready to be lowered. At the lower end of the stock, another rope was attached to a 4:1 pulley system with a locking feature which would allow the stock/clamps to be pulled away from the smock and eventually out of the canister. The other end was attached to the tow-bar of a car with the handbrake on and in gear!

As the tension was released in the winch cable the stock and clamps slid down gently and just prior to reaching the ground, the two wheeled trolley (used for the sails) was attached to the tip to allow the stock to roll along the ground. The only snag was that due to the orientation of the cap, the entire stock needed to be rotated round by a few degrees in order for a clear run of driveway. This entailed releasing the brake in the Mill to allow the windshaft to rotate very slightly. As the stock was pulled forward to the point where the upper end would clear the canister, the rigging would need to be reset otherwise the stock would hit the smock due to the rigging point being much further down. Once almost clear of the canister, the pulley was moved to above the canister (suspended from one of the studs removed from the clamps) and the cable passed inside the canister and attached to another sling attached to a bolt which could now be passed through the hole at the tip of the stock. The winch was then removed and mounted on to the ‘timber bob’ and railway sleepers (again used during sail removal) as they could be positioned directly under the canister and thus allow the cable to pass up to the pulley without fouling the sides of the canister. Once tension was taken up again, the lower end of the stock could be drawn away from the Mill using the ground ropes whilst the tension was released allowing the upper end to clear the canister without swinging into the smock and be lowered to the ground. Once on the ground, the wheels were used to roll the stock into a position above some sturdy saw horses and lifted by 4 people into position. It is estimated that each stock with respective clamps has a mass of around 500kg! 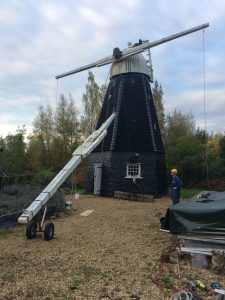 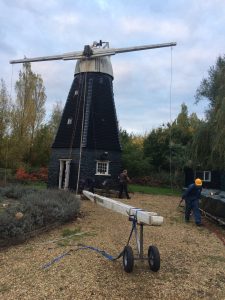 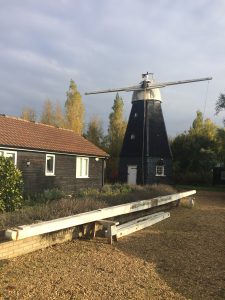 Sunday saw the same principles being used to remove the rearmost stock, however subtle differences in the arrangements were needed partly due to the fact that the clamps have to fit around a curve on the canister. The winch was rigged to a point lower on the stock (rather than the tree) and then looped up round the pulley attached to the canister thus providing a 2:1 advantage. The disadvantage of this rigging was that the winch had to be operated in mid-air whilst descending down the Mill. Once the stock started to be drawn away from the mill it made it more difficult to reach and thus harder to operate. Fortunately by this stage the stock was almost clear of the canister and could be re-rigged as before with the pulley being moved to above the canister and the winch anchored to the timber bob and sleepers. 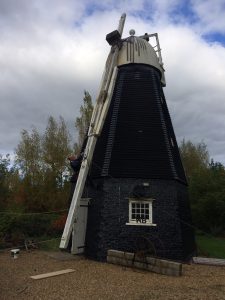 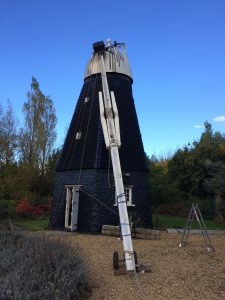 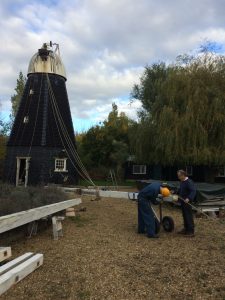 Once on the ground the stocks and clamps all seem to be in reasonable condition bar a bit of warping and some shakes (gaps where the timber has shrunk and split). There is one small area of decay on one stock near the tip but this should be repairable before it spreads further. 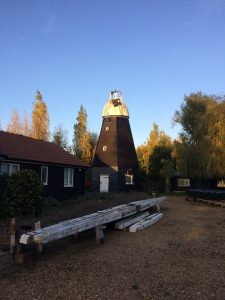 The next step is to understand what is required to make the cap sound and allow it to turn to wind.