After a long wait the stocks are ready to come down this weekend. All pre-requisites have been completed now and the kit needed to lower the stocks is on site. Having removed the striking rod in early September, which would have prevented the stocks moving out of the canister, this will now allow the clamps and then the stocks to be lowered. To do this the onion at the rear of the rod had to be cut off with an angle grinder as years of corrosion prevented the roll pin being removed. Once this was done, the striking rod could be extracted from the front of the mill – easier said than done being close to 4m long and weighing around 20kg! 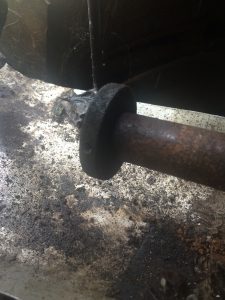 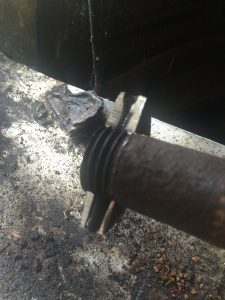 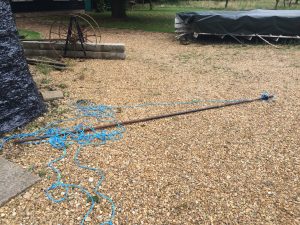 In order to stop any movement of the stocks whilst the clamps are removed, a large rod will be placed through the hole of the canister which passes through the stocks and only removed once the stock is safely tensioned using a winch.

The first task is to remove the clamps that sit either side of the stock – they will be lowered in the horizontal position by first removing the nuts and studs that hold them on and by then lowering the lower clamp down using two pulleys and ropes sat on top of the upper clamp and held on to the stock using ratchet straps. Once the lower clamp is off, the pulley blocks can be removed and the stock rotated so that the other clamp is facing downwards (having secured it to the stock with ratchet straps first). The pulley blocks can then be replaced on top of the stock and the other clamp lowered down in the same manner.

Once the clamps are off, the stock can be aligned vertically and rigged using another pulley attached to the canister with a suitable rope passed around the pulley and attached to the sail hole in the stock nearest to the centre. The other end of the rope will be fixed to a winch which can be tethered to a nearby tree. Once the tension is taken up the wedges holding the stock in place can be removed and the safety rod removed. The tension can then be released slowly to allow the stock to descend under gravity.

As Northfield is relatively short, the stocks will reach the ground before they clear the canister which means having to rotate the stocks and slide them out at an angle – an interesting challenge when using ropes and winches alone. Just before the stock reaches the ground, a steel trolley with a trailer wheel will be attached to the end to allow it to roll along the ground in the next operation. Another rope and pulley will then be used to pull the trolley end away along the ground whilst also releasing the tension to allow the stock to slide out of the canister.

Once the upper tip of the stock clears the canister, another rope will be used to pull the whole stock away from the smock as it is then carefully lowered to the ground.

The same process can then be repeated on the rear stock.